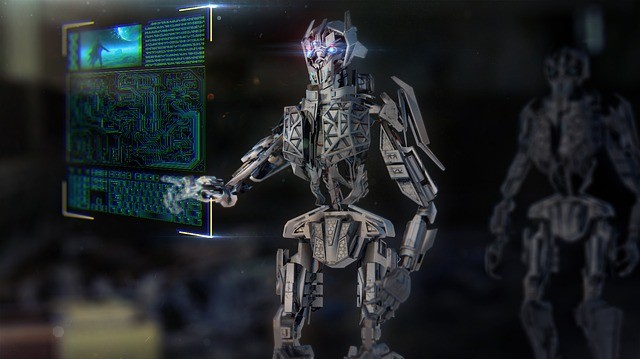 Did you say AI and Drones? Yes, I did.

Drones are everywhere these days. Mostly, with an actual person behind the controls. Still, much of their operation is automated (holding position, avoiding obstacles, flying along a predetermined flight path, etc.).

Advancements in AI are being made every day. It’s only a matter of time before these two industries are merged together to bring both amazing and horrifying capabilities to these flying platforms. 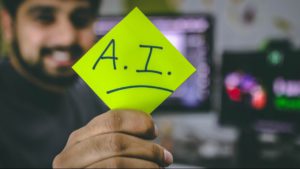 AI stands for Artificial Intelligence. Basically, it’s the idea of being able to create a machine that can think for itself.

Now there are many people out there that are worried about the eventual robot overthrow of the human race. Fears of Skynet becoming a reality and wiping us out, etc. I think we’re quite a way off from that scenario, personally.

There are advancements being made today in the areas of object recognition, figuring out how to change plans based on current data, being able to read people’s emotions and so on but I think we’re far from actual thinking machines and the potential for them to become self-aware.

One such tool that’s been touted recently is Watson. You might have seen it on Jeopardy or use it’s processing power for business purposes. It’s just a great example of the potential AI has for making our lives better.

Still, the advancements being made today can be combined with drone technology to enhance the capabilities currently available and even make drones useful in a variety of situations where they may not have been considered before.

On the other hand, these same advancements can be used in ways that can be harmful to others, such as in military deployments (this is both a good and bad use for AI and Drones). On one side, using drones in dangerous situations can save troop lives. On the other, they can be used to kill the enemy (good for war, bad for humanity). 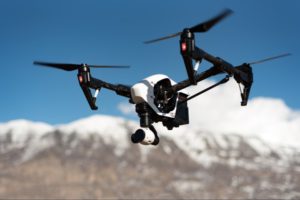 AI and Drones for Good

Most drone use right now is manual. What I mean by this is there’s a pilot at the controls. That doesn’t have to be the case in all scenarios though. With a little automation and clearance from airspace authorities, many time-consuming and dangerous tasks can be handled safely and efficiently.

I recently wrote a post about unique uses for drones where one great example was using drones to detect landmines. Now imagine adding AI to the mix to completely remove the pilot from harm’s way, locate the difficult to detect mines and even trigger them so they won’t hurt anyone ever again.

Drones are used quite a bit in search and rescue efforts. Imagine an AI system, capable of identifying heat signatures or human-like shapes in the video feeds as it flies the search pattern. It can be the difference between missing your subject completely and finding them, not to mention the time savings as machines can process data much faster than people can.

Now consider using drones for emergency responders. Firefighters can use thermal cameras to view hot spots and whatnot. This allows them to plan their firefighting efforts effectively. Having an AI process the information and predict the fire’s path, speed and so on can go a long way toward making those efforts more effective.

The same can be said for police efforts, from finding suspects to predicting the path they will take when in pursuit. AI can be of great help here. And, with the help of thermal imaging, it can be easier to spot if the suspect is armed, with others and so on.

I can really see a lot of potential for AI and Drones being used for good. These are by no means the only pros for AI and Drones. They’re just the ones I could think of off the top of my head. 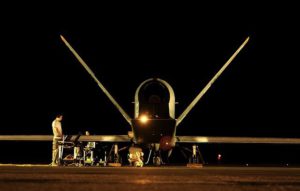 AI and Drones in Warfare

Drones can be used to save lives, they can also be used to take them and have been for quite some time. Still, these uses have all been with a human at the controls. That’s slowly changing.

I’m not going to argue the merits of drones killing people. There’re arguments on both sides of the fence on that one. I will say, I do see where ending a person’s life to save others can be justified and, using a drone to do so, doesn’t put others in harm’s way (assuming it’s a targeted strike and not some cluster bomb type of attack).

Up until now, we think of military drones as those huge stealthy aircraft like the Predator, Fire Scout, and Global Hawk but there are other drones out there. Smaller ones for reconnaissance, robots for disarming bombs and so on.

One exciting and scary application is to use smaller swarming drones that can evade capture or being shot down, work together to obtain their goal (such as one blasting a hole in a wall, allowing others to gain access to a building) and targeting specific individuals with deadly precision.

Here’s a great, video showing the potential of such drones. Please keep in mind this is a fictitious example and isn’t reality (yet):

Such a swarm would be hard to defend against, especially if they are autonomous and jamming control signals wouldn’t have much effect, if any, on their operation. 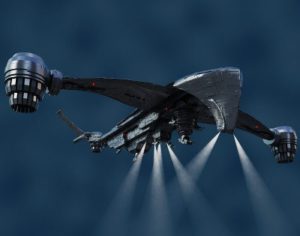 Potential Uses for AI and Drones, Both Good and Bad…

I’ve kind of already touched on the potential uses for AI and Drones in the previous sections but I still wanted to drive the idea home and talk about what can be, if we make advancements in these fields.

Although, already being used in firefighting, AI can help with tracking and decision-making, allowing firefighting efforts to be used more effectively.

Drones can be difficult to see and hear. That can give law enforcement an advantage. Drones are already used in a limited capacity but, by adding AI to the mix, they can do so much more.

This is another field where drones are already making great strides. Still, with a little AI enhancement, it can make efforts much more effective and reduce time and effort, which can mean the difference between life and death.

War is messy. Drones can add to that mess and they can keep it from being much worse. It’s the application that counts here. AI can help mitigate damages and save lives.

Making the World a Safer Place

Who doesn’t like this application? I have several articles on drones doing good. Drones are already used in places deemed unsafe for people. Still, someone has to control them and some of those places aren’t great for radio-controlled devices. AI can remove this limitation and get the job done.

There are so many more potential uses out there. I just can’t think of them all myself.

So there you have it. Personally, I find the idea of combining AI and Drones very exciting. Arguments can be made, both for and against AI and Drones, but in the end, it’s intent and application that will determine if it’s a good thing or bad.

I, for one, think it’s a great combination if used ethically and proper security steps are taken (there’s nothing worse than a swarm of killer drones with poor control security). In the end, I can’t tell you what to think (Well I can, but you shouldn’t follow me blindly.). Make up your own mind.

What are your thoughts on AI and Drones? Is it good? Is it bad? Are you actively using drones in one of the scenarios listed above? Do you work on AI software?  Is there an application or scenario you think should be listed in this article? Did I get something wrong? I’d love to hear what you have to say. Please leave a comment below. I read and respond to each and every one.

I look forward to what you have to say.

What is the Autel Evo? – An Amazingly Capable Contender for 2019!