With so many negative views of drones in the news today, it’s nice to see something positive from time to time. Here’s another post in my Positive Press series. This time it’s about how a drone was used to help locate a girl lost on Lake Michigan ice. 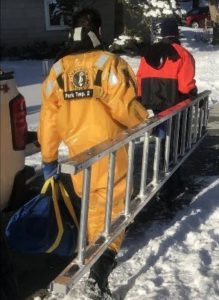 On Monday, February 18th, 2019, a neighbor of the Park Township noticed a dog howling on the ice of Lake Michigan. It appeared to be the same dog seen earlier walking on the ice with a 15-year-old girl. Although members of the fire department could see the dog on and off from the beach, the girl was nowhere to be found.

They decided to deploy a drone to help in their efforts to locate the girl. Based on the images, it appears to be a DJI Mavic series drone, although I can’t really tell if it’s series one or two.

They were able to locate the girl stranded at the bottom of a ledge about 1,000 feet offshore. It’s reported that she waved at the drone as it approached her. Apparently, she had fallen about 30 feet to the ledge below.

Rescue members were able to walk on the ice to the girl’s location and lower a ladder down to her. Apparently she did not enter the water at any time nor did she sustain any injuries. The girl was brought safely back to shore along with her dog, both without incident. 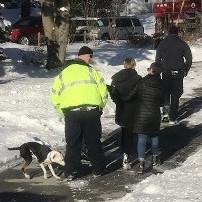 Drones are being used more and more to augment rescue efforts, assess varying situations and for safety in general. It’s nice to see that their use for good is starting to get some “face time” when it comes to the news and publicity.

I hope more and more of these types of uses get showcased in news publications as it shows that drones aren’t just toys or conduits for nefarious use but rather excellent tools that can contribute to the community.

I also commend other drone blogs/sites who report on such things. DroneDJ is one such site who also picked up on this incident.

Do you know of other positive press sources I can post about? Do you have something to say about this post? Please comment below. I’d love to hear what you have to say.

Community Interactions – Sadly, Drone, Engaged in Search for Missing Dog, Shot Out of the Sky